Kayla: A Modern-Day Princess series is the latest project in a long line of ambitious (and successful!) book projects from author, mom, and CEO of Make A Way Media, Deedee Cummings.

What makes this exceptional diverse picture book series even more unique is the fact that it was inspired by the life of the author’s daughter, Kayla Pecchioni. The Kayla series is not Kayla P’s real-life story, but it reflects the joy of a proud mom watching her talented daughter grow, bloom, and flourish.

“I am so proud of her and how she weathered storms throughout her young life. She has strength and resilience that make me incredibly proud. Some of her fire came from me, but just as much was firmly embedded in her DNA before she was born.” ~Deedee Cummings (a.k.a The Proud Mom).

After graduation, the real-life Kayla picked a challenging profession to pursue, but she is flourishing as a triple-threat performer. As a professional actor, dancer, and singer, Kayla P’s accomplishments continue to blaze the trail for other Black female entertainers. 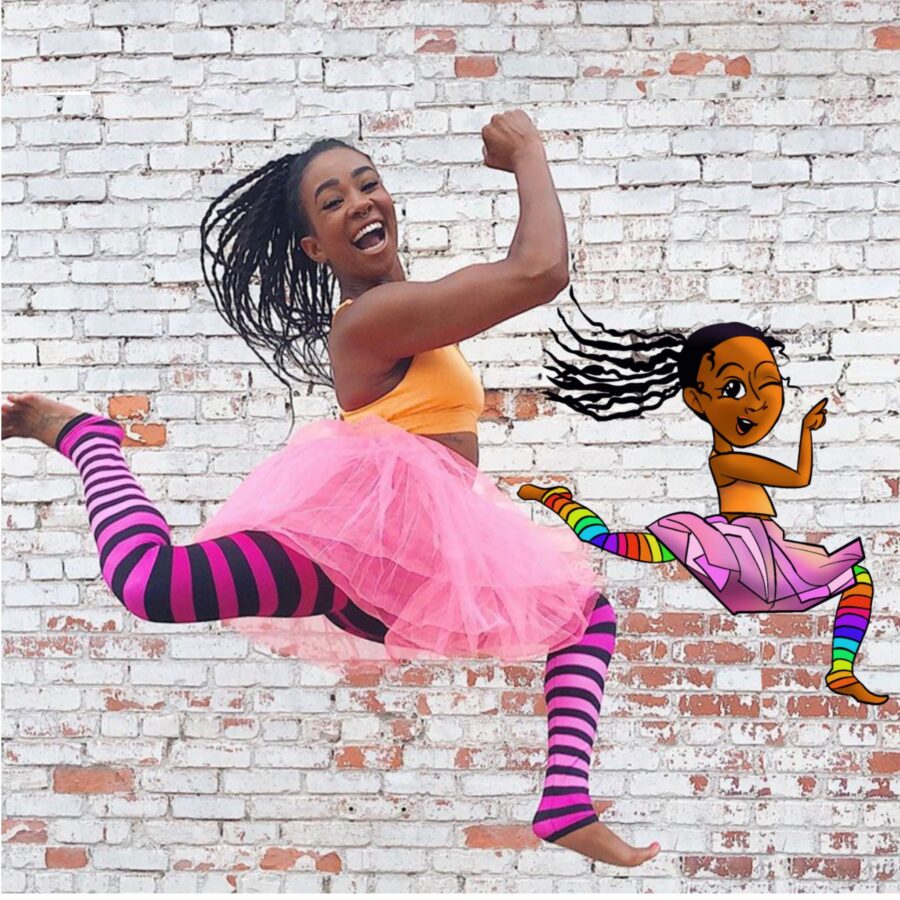 It’s no secret that the competition for roles on Broadway and/or Hollywood is steep, and that hurdle is made even more challenging when an entertainer is a woman of color. In this highly competitive world, talent and drive are sometimes not enough, but still, Kayla P. has persevered.

Q: Tell me a little about yourself (accomplishments, awards, past roles, upcoming roles, etc.

Kayla P: I am a professional stage actor and educator living in East Harlem, NYC. I graduated cum laude from Northern Kentucky University with a BFA in Musical Theatre. Most notably, I spent nearly two years touring with the Broadway show THE BOOK OF MORMON, playing the leading lady – Nabulungi. I also have had the honor and joy of performing all over the world. A few more of my select credits include DREAMGIRLS – a role where I debuted with the first Black cast to appear on South Korea’s Broadway. Also, the RADIO CITY CHRISTMAS SPECTACULAR at Radio City Music Hall with the Rockettes. I also played Maggie in A CHORUS LINE at SIGNATURE THEATRE and was one of the first Black women to play this classic role. When I’m not performing, I’m part of The Broadway Collective teaching faculty and I am part of prepared upcoming artists for the professional industry. I am also devoted to normalizing mental health stigma and spreading an overall message of kindness

Q: How long has starring in a Broadway show been your dream? At what age in your life did you start preparing yourself to go after this dream?

Kayla P: For as long as I can remember, I have been an artist and have enjoyed exploring all mediums of art. But I’m a firm believer in destiny, and I feel like I was on the path to becoming the artist I currently am, without even knowing I was on the course. I started my training in dance at age 4. I loved performing, and I loved making people smile, but I didn’t know how to proceed with it from there. I wasn’t keen on the idea of becoming a prima ballerina or a company dancer, so I thought I’d eventually have to let it go. It wasn’t until my final year of high school as a dance major at the Youth Performing Arts School in Louisville, KY, that I was cast as a lead actor in my first musical. That’s when I realized that the combination of singing, dancing, and acting was my niche. 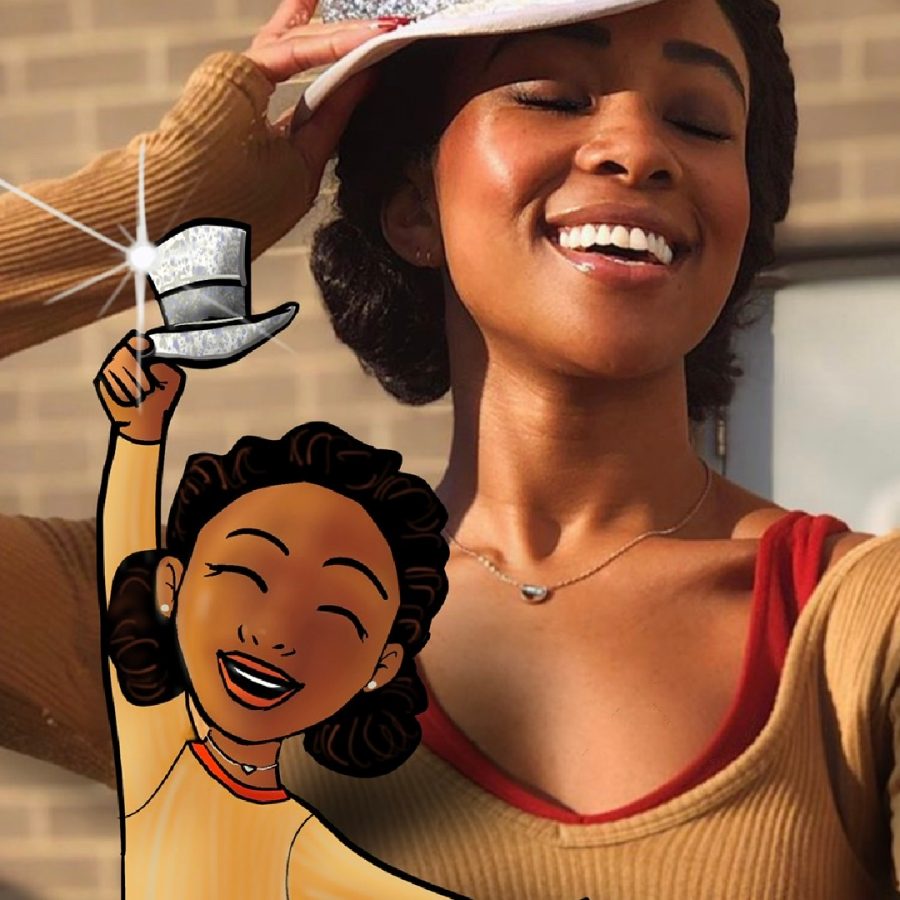 Q: Your mom is one amazing lady! Share how she has inspired you and even share some of her words of wisdom.

Kayla P: In the KAYLA series, Kayla’s mother is described as “a hard-working woman who struggles with the guilt of not being as available for her young daughter as she would like,” and there’s a bit of art imitating life in that description. My mother is a powerhouse multi-hyphenate and she works hard. I’ve learned so many lessons from her, and among them is the importance of persistence and not letting setbacks become hold-backs. And most importantly, follow your dreams. A lot of people spend their lives saying, “I’d like to do this, but I don’t know if it’ll ever happen.” My mom doesn’t do that. My mom has so many dreams, and she’s determined to accomplish every single one. She’s the first person that I call when I need inspiration or need advice.

Q: If you were to let parents, teachers, and librarians know ONE THING about the Kayla: A Modern Day Princess series..what would that one thing be? 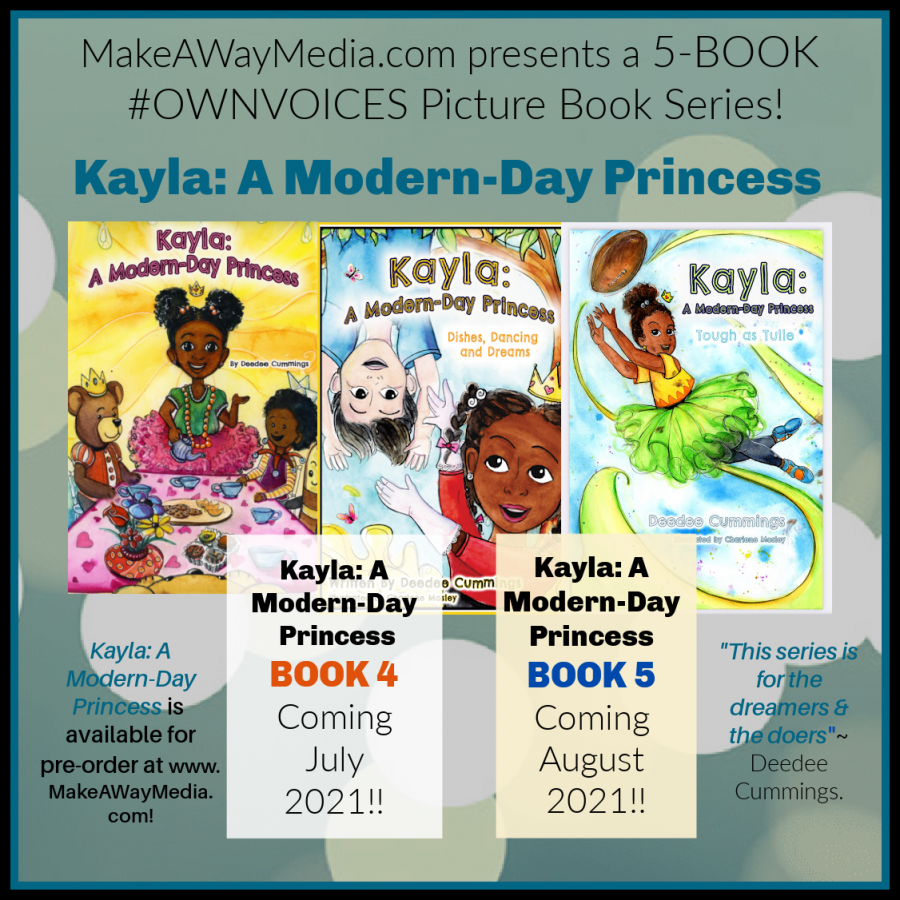 Kayla P: I would want them to know that this book is universal. You may hear a seemingly gender-specific name like “Kayla” and a gender-specific term like “Princess” and think that KAYLA is solely extending its message to young females, and that’s not necessarily the case. It’s not just for the “little princesses”; it’s for everyone. The overall messages of KAYLA are some that you can not stick to on one end of a gender binary. Kayla follows her dreams; she exemplifies compassion, and curiosity, and kindness. The books themselves demonstrate the significance of representation and the bond between parent and child. These are themes and ideas that all children could benefit from.

Q: How has COVID affected your professional work? 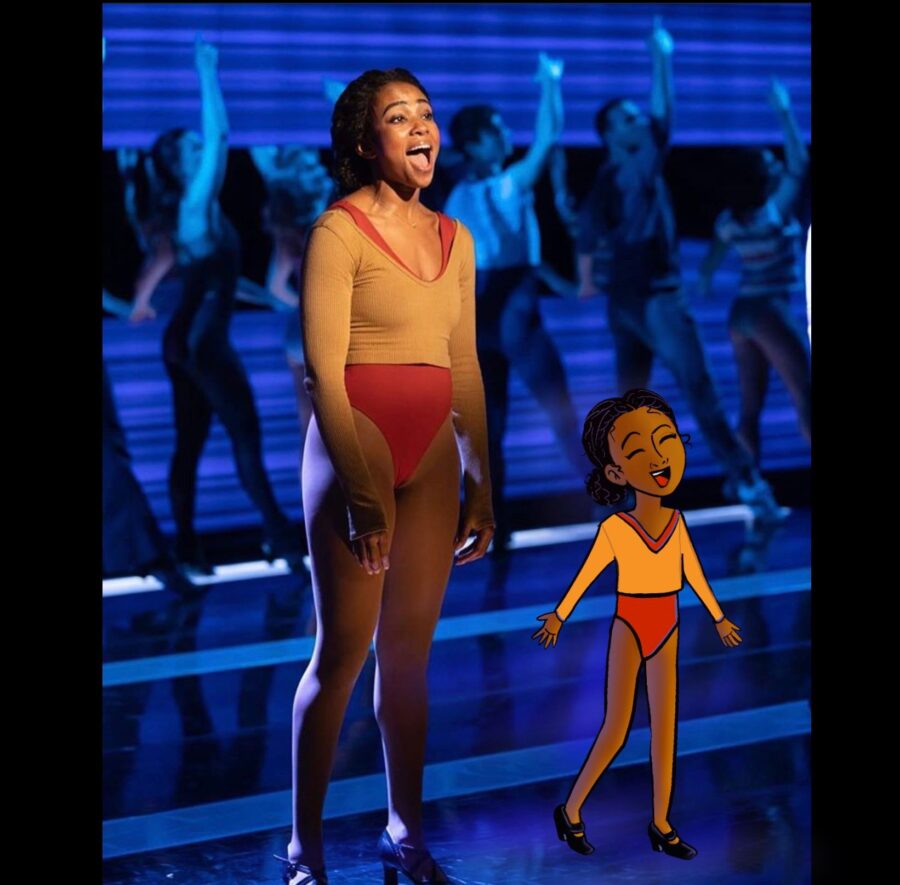 Kayla P: It’s no secret that artists were some of the most challenging professions hit in this pandemic. Before the COVID shutdown, I was a week away from debuting as Donna Summer in the tour of the Broadway show SUMMER: THE DONNA SUMMER MUSICAL. When we went on hiatus, my focus went into adapting and growing the tools that I already had to begin an entirely new ‘hustle.’ I’ve gotten to tap into virtual performing, film work, commercials, modeling, and content creating for social media. I’ve become an advocate for fair pay amongst artists and could connect with artists worldwide. But above all, I’ve found a second passion in being an educator to young artists. I’m eagerly awaiting the return of live theatre, but this time in between has drawn me even closer to my community.

Q: What advice would you give to little girls everywhere about following your heart and your dreams. 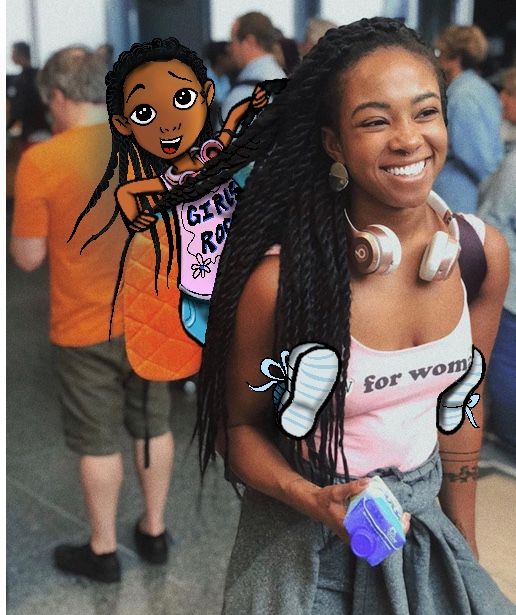 Kayla P: Be fearless, stand up for yourself, and always lead with compassion and kindness. Women are strong – and we get stronger the more we work together to uplift one another.

Q: What excites you the most about the upcoming Kayla series? 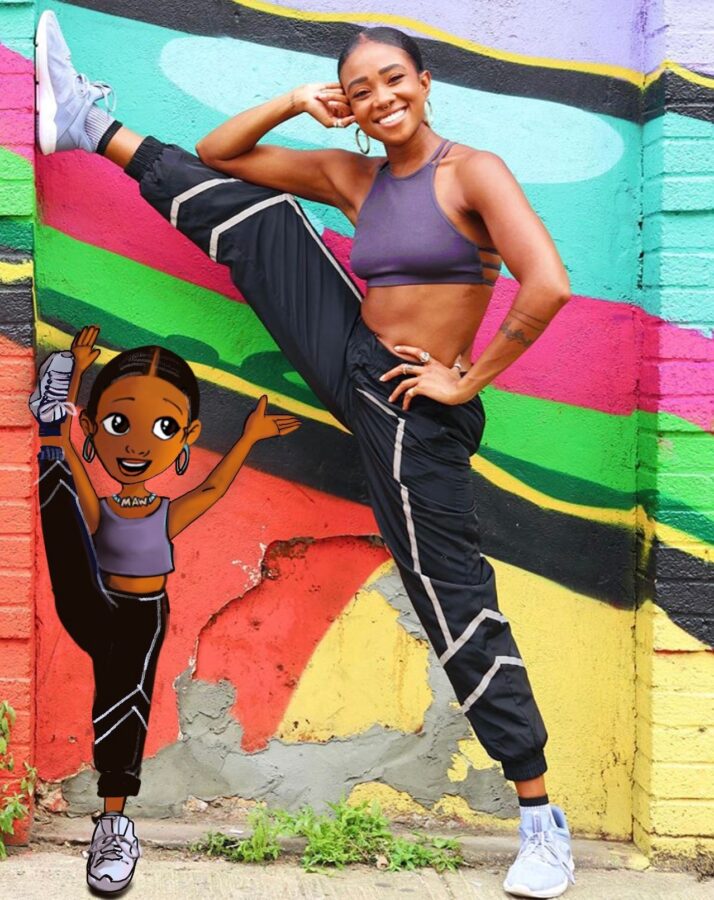 Kayla P: It’s my namesake, of course! Black children are so underrepresented in children’s texts, and they are hardly ever the lead. To witness these books in the hands of all children is a legacy I have so much pride in. 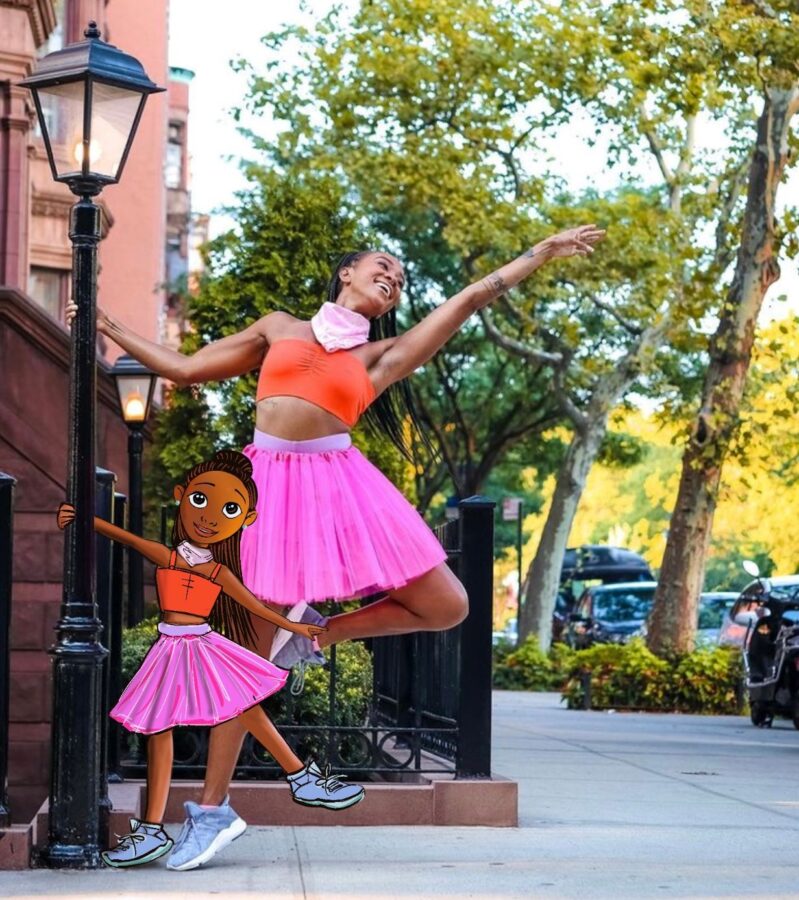 Kayla P: In my free time, I like to take long walks around New York City. The fresh air clears my mind, and I want to explore new areas I may not have covered yet. I also spend my time enjoying indoor gardening and making collage art.

Q: If you could have a superpower, what would it be and why?

Kayla P: While I do believe I have some superpowers of my own, I’ve always envied the power of invisibility. I tend to give of myself so much to others, which isn’t always a bad thing. But, sometimes, it’s nice to take a break and recharge your batteries.

Q: Any final thoughts or advice? 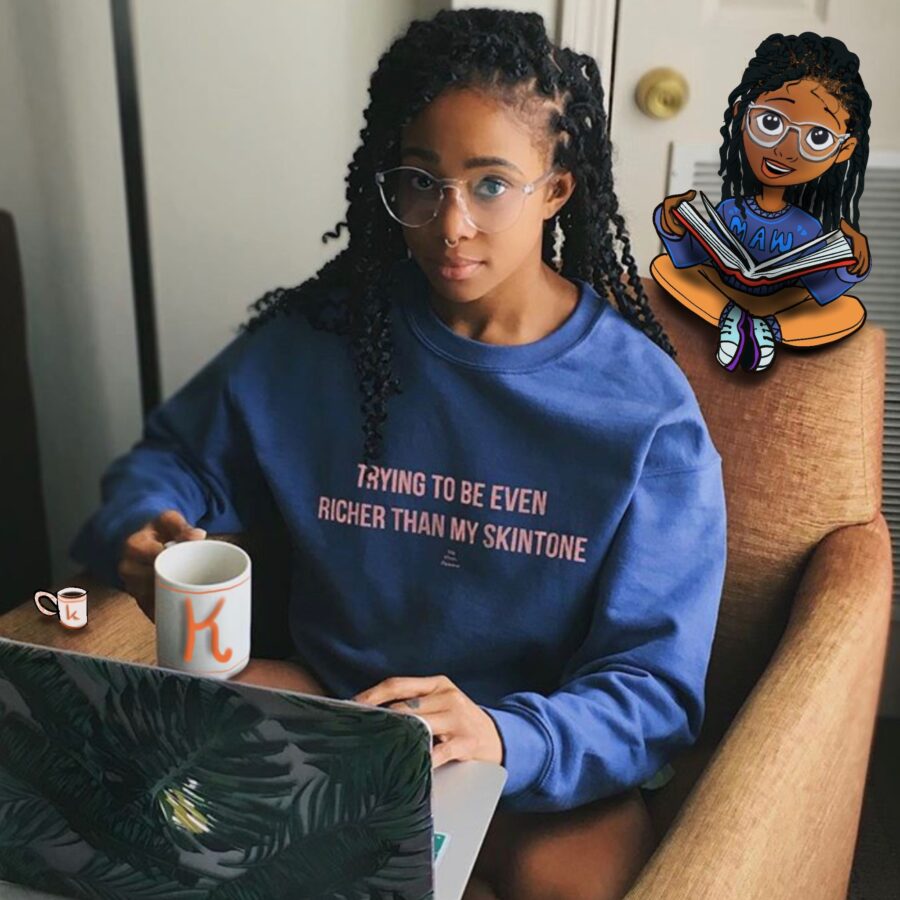 Kayla P: When you find your dream… dream big, and be daring! I am Kayla, and you are Kayla too.

Kayla: A Modern-Day Princess Series Book One is HERE! 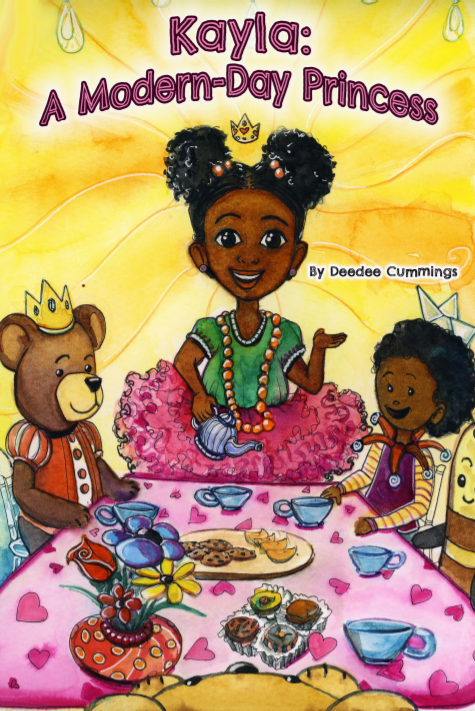 Kayla: A Modern-Day Princess: is a heartwarming story about family, role models, dreams, and discovering a determination for growth. This five-part diverse picture book series shines the spotlight on a little brown girl who loves musical theatre and never lets anything get in the way of her dreams. It seems that everyone else has an idea for who she should be, but in the end, she discovers that she is the one who gets to decide.

Grab your copy of Kayla: A Modern-Day Princess (Book One) in the Make A Way Media Bookstore or on Amazon in paperback form or for Kindle.

Kayla: A Modern-Day Princess: Dishes, Dancing, and Dreams will be available for purchase on June 1, 2021! 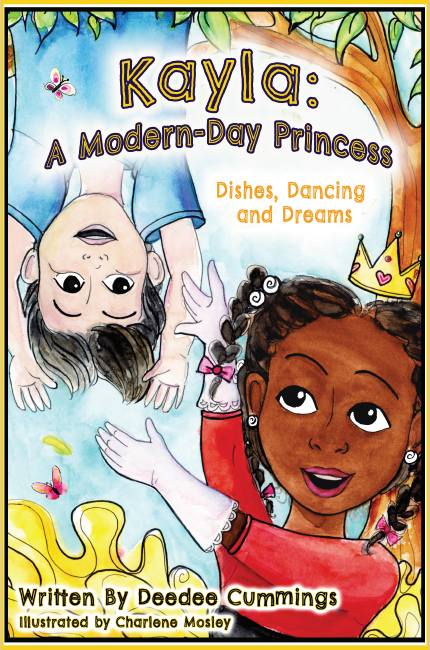 The Kayla: A Modern-Day Princess series of #OWNVOICE books is for Dreamers and the Doers of all ages. This diverse picture book series is a heartwarming look at the importance of family, speaking our truth, dreaming freely, and knowing our worth. Book 2 is part of a five-part series that shines the spotlight on a little Black girl who never lets anything get in the way of her dreams.

Parents, Caregivers, and Educators: By investing in this series, you help every child see that Black and Brown girls can be leaders, princesses, and the stars of their own stories. Children need to read stories that include characters who look like them. Offering these types of books to young readers is an essential part of building self-esteem, cultivating empathy, encouraging tough conversations, and letting children of color know they matter.